You are here: Home1 / Company in Dubai2 / Types of Entities in the UAE3 / The Foundation

A foundation is an independent legal entity that holds assets separately from the personal property of the founder.

Unlike a trust, which is a concept derived from common law, the foundation originally comes from civil law jurisdictions.

It is similar to a corperation in that it has its own legal personality. However, a foundation does not issue shares or any other legal title – it is an “orphan” structure. A foundation must have one or more business activity, which can be for the benefit of one or more beneficiaries (named or not).

Foundations are used mainly for the following reasons:
– Asset structuring, succession, and estate planning;
– Protection of assets against rules of forced inheritance, hostile creditors and takeover bids;
– Long-term holding structure;
– For charitable and/ or philanthropic purposes.

Overview of a Foundation

How a Foundation Works 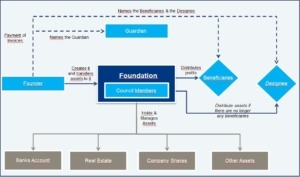 Required Documents to Set Up a Foundation

Here are the documents to provide for each natural person actor of the foundation:

Here are the documents to be provided for each legal entity actor of the foundation:

Pricing for a foundation

The costs of a foundation are as follows:

What our package include

Our packages include the following: